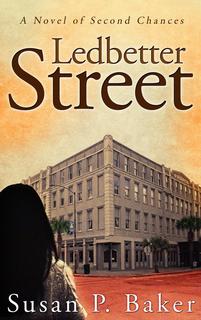 The cover of Ledbetter Street

Many parts of Ledbetter Street were inspired by events in my life. Here are some of them:

In the '60s, when I was in high school, girls who became pregnant were sent away to deliver and give up their babies. I often wondered what it would take for a woman to get her child back after surrendering him for adoption. When I was on the bench, I heard several heart-breaking cases involving contested custody and adoptions.

I volunteered at my class reunions and had conversations with people who were conflicted about seeing old beaus and/or reliving old experiences and reviving old resentments. No matter how old we get to be, we still have human emotions and attachments.

I have witnessed the suffering of those inflicted with Alzheimer's and many forms of cancer.

Once, an autistic boy, the subject of a Children's Protective Services case, came to my court and wandered around, in and out, and even in and out of my chambers while I heard the facts of his case. Though I have known other people on the spectrum, I've never been able to get Robert out of my mind.

Having sat on a family court bench, I heard numerous family violence cases. We had a trial once involving the termination of parental rights of a mother (the father relinquished) who couldn't protect the children (or herself) from their father. Though social services worked with her, and even though I spoke with her, she was emotionally unable to break away from his influence. She knew she was going to lose her children forever (and even that he might someday kill her) and yet left the courthouse with him after the trial ended.

I love to haunt pre-owned clothing stores in whatever cities I visit, even in other countries. Seeing how they are run and what they offer is a real treat for me.

From 1998 to 2003, I lived on a street that was undergoing a metamorphosis from the "old downtown" to an arts and entertainment district. There I met artists, musicians, antique and gift shop owners, restaurant owners, and even homeless people eating out of dumpsters.

What's depicted in Ledbetter Street is fiction but has a basis in what I witnessed on Post Office Street in Galveston, as well as my life's experiences set out above. https://www.postofficedistrict.com/