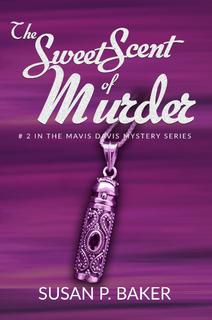 The cover of The Sweet Scent of Murder

While St. Martin's Press, Inc. was in the process of publishing My First Murder, I was told to write the next Mavis Davis mystery because it was going to be a series. Though I was running for judge, practicing law, being a mother and a wife, I scratched out the sequel. The assistant editor accepted what I submitted, saying "it would do" and advised me to start on the third one.

A year later, I was midway through the third book when St. Martin's rejected the second one.

No one ever said why. My series became an "orphan." I tried to find another publisher, but generally if you publish the first of a series with one publisher, no one else will pick up the series. One editor I met at a conference did take it and held on to it for a year before rejecting it. Finally I shelved it. Being the first woman to run for judge in my county, much less to win, I was in high demand as a speaker. I was married and had two children. Somewhere in there I became the President of the Southwest Chapter of Mystery Writers of America, which took up even more of my time.

In 2005, Five Star Mysteries published a mystery of mine in hardback. In 2006, they published it in paperback. I thought if they published one of my novels, maybe they would publish another. I pulled out the second Mavis novel and read through it. I realized then why St. Martin's had rejected it! Why hadn't my editor, the assistant editor, or my agent told me it needed a lot of work?

People often ask where do I get my ideas? Over the twelve years I served on the family court bench, I heard many cases of spousal and child abuse, both sexual and physical. In some cases, a party would make allegations in order to get the upper hand in a custody fight. Sometimes the allegations were proven to be true. Other times, the allegations were shown to be false.

Cases involving allegations of child abuse are just about the hardest cases to come into court. They're heart breaking no matter which way the case goes. Just an allegation alone is devastating.

I was idealistic when I started practicing law. I was going to only represent women, because women had been so mistreated over the years. My eyes were opened quickly. My first court appointment was a misdemeanor wherein every time the father tried to exercise his court-ordered visitation with his daughter, the mother would call the police and have him arrested for criminal trespass. In another case, the mother alleged the father had abused the children. She fled to Europe with the kids and didn't return until they were grown. The abuse issue was never litigated because the father didn't have enough money to fight. I saw cases where one person married the other for his or her money. And cases where people were just flat out mean. People and their witnesses often lied in court. Hateful things happen on both sides. Either parent can be the accuser or the abuser, the perpetrator or the victim.

I engaged in what-ifs. Suffice it to say that after I revised the second Mavis book and renamed it, in 2007 Five Star Mysteries published the hardback of The Sweet Scent of Murder, a novel full of murder, kidnapping and sexual abuse allegations, criminal convictions, fraud, manipulation, you name it. Five Star Mysteries quit publishing paperback novels, so in 2015 I had a new cover designed and published the e-book, followed by the paperback in 2018.