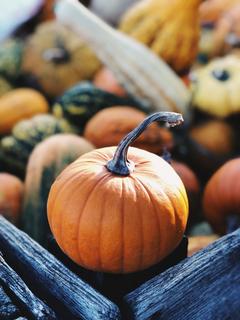 Here are two more recipes I love to make when the weather is cooler. I love putting pumpkin in everything and these recipes are no exception!

First up are the Breakfast Brownie Muffins. You can make these exactly as they're written, or you can replace the egg with the flaxseed eggs I talked about in my last post! Either way they're delicious. I also added the option to include pumpkin seeds instead of walnuts for a bit of plant protein, and I recommend using coconut flour instead of almond flour if you like a slight coconut flavor!

Steps: Preheat the oven to 350°F. Melt the coconut oil and set aside to cool a little. Whisk the eggs, vanilla extract, coconut cream, and almond milk together. In a separate bowl, combine the almond flour, baking powder, ground chia, erythritol, and cacao powder together. Stir in chopped walnuts or chopped pumpkin seeds. Once the coconut oil is cool enough, whisk it into the egg mix and then add the egg mix into the almond flour mix. Combine well and divide between 8 parts of a greased muffin tray. Bake in the oven for 15-20 minutes, or until a cake tester inserted into the center of one comes out clean. Allow to cool before removing from the muffin tray.

Next up, Turkey Pumpkin Chili! I like to exchange garbanzo beans instead of the cannellini beans, but either way is great! The spiced pumpkin and lean turkey of this dish always leave me wanting more. It's definitely a personal favorite, so I hope you like it!

Stir beans, pumpkin, water, and broth into turkey mixture. Bring to a simmer over medium-high heat, stirring occasionally. Reduce heat to medium and cook, stirring often, until heated through, about 15 minutes. Top with hot sauce, sour cream, and scallions, to taste.