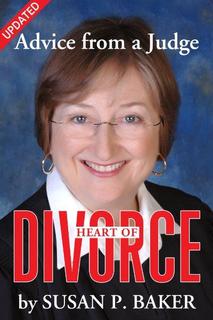 The cover of Heart of Divorce

For many years, I witnessed the frustrations of litigants who could not afford lawyers and would come to court ill-prepared to finalize their divorces. Judges are not allowed to practice law. We're not allowed to help people prove up their petitions. Many times I had to turn people away, telling them they had not properly prepared the paperwork, followed the rules or the law, or perfected service on their spouse.

The other thing is, over the course of practicing law and presiding over a family law court, as well as having been divorced myself, I saw the heartbreak of family disintegration. Although I had made my living as a (mostly) family law attorney, I did not enjoy people having to lay out thousands of dollars to prosecute their cases. That money could have been put to good use for their childrens' support and education. People who divorce are pretty much crazy for a couple of years, myself included. They make poor decisions. Their emotions take hold and control their behavior. I hated to see people fight when splitting up could be ever so much more peaceable.

One night, when I was on vacation, I dreamed I wrote a book for pro se litigants that guided them through the divorce process. When I woke up the following morning, I opened my laptop and began writing. Heart of Divorce came out less than a year later. Almost immediately after that, large publishers saw dollar signs and published thick books telling people how to fight to the death to win their divorce cases. There are no winners in divorce.

In my small book, in addition to chapters informing the reader of the process from breaking the news to one's spouse to finalizing the paperwork, I included anecdotes from some of my cases that I thought were interesting. All true! (Though names have been omitted.) The title Heart of Divorce, though awkward, was suggested to me by a professor who taught a nonfiction writing course I took in Minnesota. Perhaps it should have been Divorce with a Heart. That's what I want to get across to people. It's possible to minimize the heartbreak of a divorce.