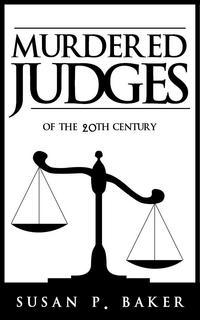 The cover of Murdered Judges of th 20th Century

In 1990, when I was preparing to take the bench, I requested our Galveston County Commissioners fund courthouse security. There were no metal detectors and no screening of people who entered the courts. The only bailiffs were retirees, some, retired law enforcement officers who were armed, others just old men who thankfully weren't armed. Some of the judges kept handguns in their desk drawers. Others just assumed they'd never need protection.

Times were changing, though. I was the first woman to run for judge county wide. I knew if attacked, I'd be unable to fend off an angry man and neither would most court participants. More and more frequently, there were news stories about courthouse violence. A woman was killed by her husband outside a courtroom. Four child support collection employees were shot to death in their office. A man shot and killed two lawyers and injured two appellate justices at a courthouse in Fort Worth in 1992. Our county commissioners didn't see the need for security (or didn't want to spend the money). At one meeting where I showed a TV news show video about the murder of a judge in Florida (Judge Bailey, 1987), one of our county commissioners laughed.

None of the other judges supported me in my request, nor did the district attorney, or even the sheriff, who was charged by statute to protect us. In fact, in a letter to the newspaper, a man asked why I thought we needed security when no one had been killed here yet. (How I was treated is "fictionalized" in my novel Texas Style Justice.) So, I started collecting information about events around the country for the whole of the 20th Century.

During a break at a conference in San Antonio, I trekked to a used bookstore and came across a book about a judge and his wife who had been murdered in Florida (Judge and Mrs. Chillingworth, 1955). I figured if I wrote a book about courthouse violence, perhaps that would convince our county commissioners of the need for some semblance of security for us. For six years, I went to our wonderful Rosenberg Library at least three nights a week and scrolled through microfiche of the New York Times Index for murders for the twentieth century. I wrote letters, made phone calls, filed Freedom of Information Act requests with the FBI, and spent my vacations traveling to places where I'd discovered there'd been incidents. There was so much information on courthouse violence, I had to narrow my book to include only judges who had actually died, not other people who were killed or anyone who had been injured.

Eventually, I was grudgingly given a six-foot-eight-inch tall retired deputy sheriff with a gun. And after I got the U.S. Marshals to do a security study of our county courthouse, which I presented to the commissioners, and after there were more and more well-publicized events occurring all around the country including stabbings and shootings in Texas, our commissioners finally acquiesced. The federal courthouse in Galveston gave us their old metal detectors and other equipment when they got new ones. The equipment was installed on the first floor of the courthouse around the elevator and stairs. That protected those of us in the district and county courts but left employees in other offices and courts in the annex unprotected. A couple of years after I retired from the bench, the commissioners built a new court complex and installed security throughout. Each court now has armed bailiffs.

My book was published two years after I left the bench. Since then, it's been referred to by judges throughout the country, at judicial conferences, and once, two years ago, I even appeared on ID TV as an "expert" on a murder case.