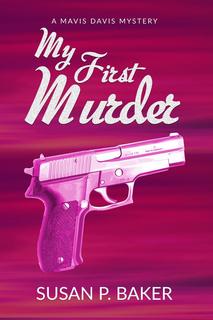 The cover of My First Murder

Back about 30 or so years ago, I had it in my head that I wanted to write romance novels because I enjoyed their escapism and because I saw an article in TV Guide about a romance writer who made $5,000 a book. That was a lot of money back then. Heck, it's a lot of money now! I thought, "Hey, I could do that." I'd been writing in fits and starts for a long time. So I wrote a romance and sent it off. I received a rejection that not only said it was terrible, but to never send her anything again!

Not to be discouraged, I decided I liked to read mysteries and suspense as well. I used to read mysteries from the adult section of the library when I was a child. I was practicing law and came up with an idea for a suspense novel about a female attorney and her client, a serious "Woman in Jeopardy" book, and I submitted it to 50 agents and editors at the same time. While that novel was making the rounds, I decided I'd write a whimsical mystery with an unrestrained female detective who said and did what I often thought and wanted to do but never did. I don't recall where I came up with the name Mavis Davis, but I was goofing around and thought that would be a fun name for a fun detective. I wrote the first chapter, took it to my critique group, and they loved it!

~
The actual idea for the mystery itself came from a time when I was unhappy in my personal relationship. My husband had taken the kids on a camping trip, so I had the weekend alone. During that time I got to thinking about running away, and then I got to thinking, "What would make a married woman, an attorney, with two children, leave her family and not tell them where she was going?" The more I thought about it, the more I decided it would have to be something pretty awful. Many women might think of escaping for a while, but not all that want to, actually do it. And if she ran, where would she go? What would she do to make a living? How would she survive without any money, credit cards, her car, with no way for anyone to be able to track her down? So from these questions My First Murder was born with Mavis Davis, a former social worker who had just opened her own office, hired by a café owner who wanted to find out who killed his best waitress.

Is it available in print (not ebook)?

Yes, most books are available in print! To order an autographed paperback, click the title of the book you would like to buy on the Works page, and click the Add to Cart button. This will take you to checkout via PayPal.
If you would like to order via Amazon or another store, on the Works Page simply press the words "Buy now!" under the book you'd like to buy and it will take you to a page with links to many sites where you can buy both physical and digital copies.