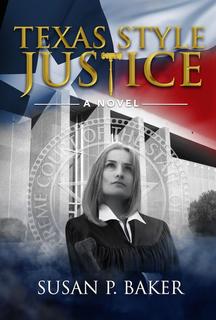 The cover of Texas Style Justice

After I "retired" as judge in Galveston at the end of 2002, we moved to Fredericksburg, Texas, because I'd fantasized about living in the rustic Texas Hill Country, which I found to be beautiful, quite different from living on the Gulf Coast.

I was able to sit as a visiting judge (judge sitting by assignment) occasionally and was assigned to Bandera, Bourne, Fredericksburg, Kerrville, Ft. Stockton, and a few other small counties I can't even remember. I loved driving to and from those counties, through the hills, past huge, old oak trees, cactus, bluebonnets in the spring, being careful not to hit deer or other animals that populated the area. Thus the setting for Texas Style Justice.

In rural Texas, the population of a county is seldom large enough to warrant a district judge all its own, so frequently a judicial district will be made up of several counties. The judge will travel as needed. I call them "circuit riding" judges.

While living in the Hill Country, I conceived the basic plot of this book. Texas is so large that the state is divided into a number of administrative districts, nine at the time I wrote this book. The governor appoints the presiding judge of each administrative district, usually a retired judge. Otherwise in Texas, we elect our judges from justice of the peace to chief justice of the Supreme Court and Court of Criminal Appeals.

I wondered, what if getting elected judge took a lot of money? Which it does. Who contributes the money to elect judges? Mostly lawyers. What if in rural counties, elections weren't as expensive, which they weren't when my protagonist originally was elected. And what if over the four years of her first term, circumstances changed as even rural counties became more urbanized? And what if my protagonist was just reelected and received a lot of support from lawyers in her counties and surrounding counties of her judicial district, but didn't understand the expectations of some of her supporters? What if she had personal reasons to harbor ambitions to rise to the highest court of the land? And in seeking the first big step toward achieving her goal, she unwittingly obtained the support of lawyers with certain expectations?

What would Victoria do when she learned of her predicament? How important was it for her to achieve her lifetime goal?

We see in today's political climate that there are appearances of impropriety in some of our courts. We can't help but wonder whether there is really impropriety or whether the rulings in those courts are made justly.

At any rate, we do know that in Texas, with judges being elected, anything is possible. Just ask yourself, were you in that position, what would your integrity be worth?