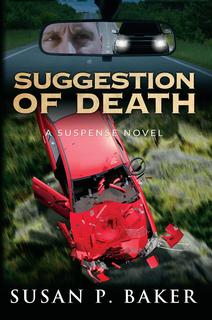 The cover of Suggestion of Death

When I took the bench in '91, child support cases were heard by a court master appointed by the judge. If a person was unhappy with the result of the case heard by the master, that person could appeal to the presiding judge. Both of the men who had been hearing cases before I arrived on the scene had archaic attitudes toward the payment of child support, giving people who didn't pay chance after chance and rarely jailing anyone for nonsupport. The payors knew that and dragged their feet while the payees struggled to take care of the kids.

The first day I took the bench to hear appeals of child support cases, I informed the courtroom full of people that a new day had come, that all the proper procedures would be followed, but payors were going to pay or go to jail.

That's not to say I was unsympathetic to men (Most payors were men, though there were a few women including one I put in jail who didn't think I would enforce an order against her because she was a woman). I had represented a lot of men when I was practicing law. I'd heard pretty much every reason why child support hadn't been paid. For example, I had a client who "couldn't pay" because he had to pay the $500 payment on his Lincoln Continental. One had to take his new girlfriend to Cancun for vacation. One potential client said he wasn't going to pay that "bitch," because she didn't spend the money on the children. I didn't take his case. But there were also people who were injured on the job, laid off, or in accidents and would pay when they received their settlements. Those were a different story.

So I sit up there, hearing excuses, and all kinds of thoughts run through my head. One day, the idea popped into my head that children would receive Social Security benefits if their fathers were dead. I never told anyone I'd had that thought, but my imagination being what it is, I started thinking what if…what if I wasn't the only person to have had that thought? What if "Deadbeat Dads" started having accidents… So I extrapolated on that idea and came up with my protagonist, Jim, a laid-off investigative reporter. I did my best to put myself in Jim's shoes. How would he feel if, through no fault of his own, he lost his job and couldn't pay and had to go to court? What did he observe? What did he wonder about?

Eventually, federal laws went into effect. The state attorney general's office took over enforcement, but the procedure remained mostly the same with an appointed Associate Judge handling the cases. The title of the novel comes from the name of the proper document to be filed with the court when a person with a pending lawsuit dies, a Suggestion of Death. These are filed so the court has notice and can dismiss the case.